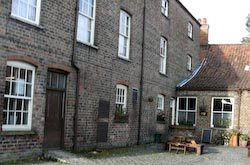 What a brilliant weekend we just had! After years of talking about it, we finally went to visit the pubs of Beverley and to make the best of it, we had an overnight stay. En-route, we stopped off in Hull to visit the two National Inventory pubs, Ye Olde White Harte and Ye Olde Black Boy, conveniently situated within gobbing distance of each other.

They both claim to be the oldest pub in Hull but, we were told, the Harte is the oldest building, converted to pub use, whereas the Boy is the oldest purpose-built pub. the Olde White Harte was frequented by the gentry, and the Black Boy by the workers. This is apparent when you enter the pubs. The Harte is large, grand, with a feeling of past decadence about it. The Boy, on the other hand is smaller and less fussy. This is obvious in the front ‘smoke room’. Sitting in this wonderful darkened, oak-panelled room it is easy to imagine the men winding down after a hard day’s slog in this smoke-filled bar. On then to Beverley.

There are five Good Beer Guide listed pubs in the Town. The first we hit was the Green Dragon and, by coincidence, there was a beer festival on. We had a pint of summat-or-other, which was very good. Next up was the Dog and Duck, just across the Market Square from the Dragon. No festival here, but a decent pint of something else (must start taking notes!). A bag of chips later (well, the girls were with us and they like to eat out) and we were off to the pub we had come for – the White Horse Inn, fondly known as Nellie’s to the locals.

This pub is SPECTACULAR!! As you approach this unassuming building from the main road, there are no clues to prepare you for what you might find inside excepting, maybe, the large amount of large Samuel Smith’s oak casks clearly visible in the cellar as you pass it on the way to the entrance. Once inside, you are immediately greeted by the smell of gaslight and the crackling of the log fire. No beer choice here – Sam Smith’s Old Brewery Bitter only. Now I’m not usually a great fan of OBB, but this was in fine form.

We managed to secure a table next to the fire and sat with our pints just taking in the atmosphere of this fantastic pub. Then we had a wander around. A maze of inter-connected rooms, at least half a dozen, most with their own roaring log fires and each with their own character. This place really is magical, and hard to describe to somebody that hasn’t been there. It is, quite possibly, the best pub I have ever visited. We wandered upstairs into a large, gas lit room that resembled someone’s living room, strewn with all types of settees, armchairs and tables and full of people enjoying the art of conversation – no pool, darts, TVs or fruit machines here! We stayed for about an hour and a half, but you could easily stay all night – especially at £4.18 for two pints and two halves!

As we were only a stone’s throw from another GBG pub, we went just down the road to the Durham Ox. This was the only disappointment of the weekend really. The pub was OK, but I had a pint of very mediocre Tetley’s bitter. I should have taken it back really, but didn’t. So we headed back into town to re-visit the festival at the Green Dragon. As it was going to be the last one, I opted for a 6% IPA from a brewery I can’t remember the name of… Note to self – start taking notes. And that was it. What a fab day out. Cracking pubs, (mostly) great beer and good company.

On the way back today, we took in the cider specialist pub, the Brandy Wharf at, er, Brandy Wharf. Fourteen ciders on tap, including a mulled variety and two made by the pub. Just a pint and a half here (well, they were about 7%).

If you’ve never done Nellie’s, do it. I’m going to go again soon as I can. Praise to Sam Smith’s for keeping pubs like this and selling decent beer at a decent price. All the rooms in Nellie’s were literally heaving. It was certainly hard to believe that folk aren’t using the pub any more. It just goes to show… If you do it right, the people will come.

4 thoughts on “A bevvy (or two) in Beverley”