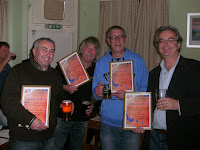 The AGM last night was well attended. Before the boring formal stuff there were some presentations made. Firstly, a cheque for £1,100 was given to MacMillan Cancer Support, this year’s nominated charity.

Then four awards: ‘Certificates of Merit’ were presented to Kenny Munro of Milestone Brewery, Rob Neil of Maypole Brewery, Paul Goodman, landlord of the Vine in Newark and Steve Hussey, landlord of the Hearty Goodfellow in Southwell.

This is the first time these awards have been made and are to note the winner’s service to real ale and the CAMRA ideal. Congratulations to all four.

The official stuff was then carried out and the existing committee re-elected (no surprise there then!). Afterwards, landlord Paul brought out Chili and jacket spuds and there was much socialising.

A great night out.