Beer Warrior had non-beer business in Bavaria. On a (rare) free day, he and a client decided to enrich their souls with matters spiritual and cultural.

What better way to do this than seek out a monastery, such as the 15th century Benedictine Kloster Andechs on Sacred Mountain which lies between Augsburg and Munich and is surrounded by magnificent alpine scenery (visible only on a clear day).

In the tradition of the pilgrims of bygone days, we trudged up the steep slope which leads to the ornate rococo monastery chapel, in the crypt of which, as surely everybody knows, lie the remains of Carl Orff, the composer of ‘Carmina Burana’. (Everybody? Come orff it). Believe me, dear reader, it is pure coincidence that we should also happen upon a holy order which has been brewing the most divinely inspired bottom fermented bock beer imaginable for over four centuries. Of course we had heard rumours about this before setting out but… 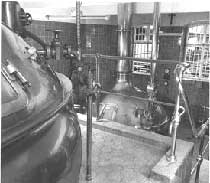 Much to our dismay, the beautiful chapel and the wall plaque commemorating Carl Orff were basked in solitude. By contrast, the adjoining vast beer hall and beer garden were overflowing with worshippers, devoutly downing glass litre jugs of foaming beer, brewed on the premises and served by master brewer monks. Phrases like “if you can’t beat ’em, join ’em” and “the line of least resistance” sprang to mind and we joined the throng of German visitors, many shipped in by the coach load, to slake our thirst (spiritual, of course). The celestial brew was a divine revelation and we were soon converted.

Bock beer, of course, is nothing like Pils (which we, in the UK quite wrongly call lager), but, instead, is a heavy, very substantial, invigorating and satisfactory libation. There are five varieties, of which we sampled the two most popular beers:

Light (in colour – not in substance – 6.8% alcohol) and dark, (in colour, like a porter or stout – 7% alcohol). The German for light is ‘hell’. Surely this is a misnomer. Kloster Andechs hell is sheer heaven. This bock beer is so full bodied and flavoursome that, with eyes shut, one might imagine one were drinking something much darker. Be warned, it is both moreish and addictive and glides as smoothly as a top of the range BMW, another Bavarian.

The dark version (Dunkelbock) has the same smooth characteristics entirely untrammelled by any intrusive side flavours. Both the ‘hell’ (sorry, heaven) and the ‘dunkel’ are beers which are as pure (and cool) as the driven snow, the result of a joyous union between a recipe formulated in 1455 and the latest technology of 1996.

Alack and alas, Beer Warrior had to drive and was denied the pleasure of any in-depth study of all that was on offer. Now comes the tragic and really sinful bit – confession time.

The prat only brought ten bottles back home and is holed up in purgatory for his lack of foresight. But salvation is at hand. Of the 85,000 hectolitres produced annually, bottles are supposed to be available all over Germany and Beer Warrior does get to Germany a lot, all in the line of duty, of course….