Don’t go to Brazil for the beer! Since I didn’t, that was OK. Go to Brazil for any other number of reasons. The rain forest, wildlife, the beaches, carnival, football, the most amazing waterfalls in the world, the Iguaçu falls. The Iguaçu falls?, never heard of them, I hear you cry. Why doesn’t that surprise me? Florida and Goa we’ve heard of, but South America, where’s that? I don’t get it? 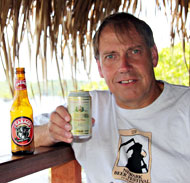 Anyway, where was I? Oh yes, don’t go to Brazil for the beer. Having said that, once a beer warrior, always a beer warrior. Well, you have to have a beer or more, all in research you see. First a bit of background though. Brazil is a massive consumer of beer. Who is the biggest beer producer in Brazil? Fingers on the buzzer… A clue perhaps? Merged with the Belgian based Interbrew in 2004? Yes, it’s our old friend Ambev (short for American Beverage).

As you may or may not know, Ambev is the Joe Frazier of the beer heavy weights (Sorry, bit of a 70’s boxing fan) weighing in at 14% of the worldwide beer market, only to be out punched by The Mohammed Ali, Anheuser- Busch of Budweiser fame. It may not come as too much of a surprise to learn that Ambev owns most of the beer brands in Brazil. So, what is the beer like, I hear you cry?

In a nutshell I found it to be fairly bland lager, or pilsner if you are trying to convince yourself that it tastes better than it really does. For years ‘Brahma’ was apparently sold under the slogan ‘The number one Beer’. But it now trails behind Skol. 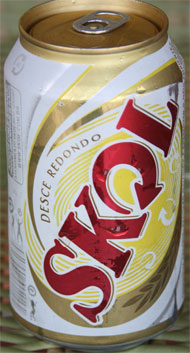 Remember Skol folks? Me too! Now you’re getting the taste of Brazilian beer! Having said that though, when the temperature is hot and humid, say, in the high 30’s and you crack open an ice cold Brahma, Skol or Antarctica it tastes pretty damn good! 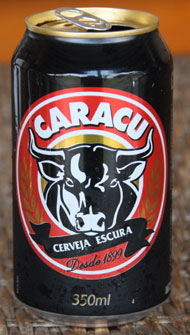 Beer is usually sold in small bottles (355ml), 350ml aluminium cans, occasionally bigger cans (473ml) and sometimes in bars or restaurants in 600ml bottles accompanied by the obligatory plastic styrofoam sleeve to keep it cool. Draught beer is sometimes available known as chopp, pronounced shope. This surprisingly costs more for less volume and, to be perfectly honest, is difficult to tell the difference!

I guess the good news is that it doesn’t cost an arm and a leg to drink beer in Brazil.
A small bottle (355ml) of beer in a bar would typically cost 2 to3 Reals or about 60 to 90p, depending where you go. The cheapest I came across in the supermarket was a 350ml can for less than 30p. ‘Bohememia’ is claimed to be the first Brazilian beer brewed and by chance happened to be my preferred tipple out of the pilsner stable that I tried. Did I detect lemons and hops or had I had too much sun?

Out of the pilsner stable? Does that point to the fact that there was a whacking great horse box of other styles? Don’t get too excited, but I did get to try two black beers.
Guinness they weren’t, but they were a very pleasant change, perhaps a little on the sweet side but nevertheless quite palatable. Caracou at 5.4%, named, I’m told after a breed of bull was a reasonably flavoured stout with distinctive roasted malt flavour. The other dark beer that I tried was Xingu which again had a malty sweetness and roasted grain flavour to it. 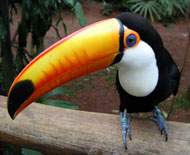 With a few other brand names in different coloured cans and labels but tasting pretty much the same my assignment was over. I may not have seen any Guinness on sale but I did get to see a Toucan!