After several years of saying, shall we do it? seven intrepid members of Newark CAMRA finally went to Belgium and spent three nights in the beautiful city of Bruges. The journey, via GNER and Eurostar, was painless and speedy. We were joined in Brussels by Chris Constantine, Newark branchs founder Chairman. Accommodation was the Bauhaus, an 8 bed apartment, working out at under 50 for the three nights.

After depositing our bags it was time for a welcome beer, the primary purpose of our visit! We set off, clutching what turned out to be our bible, Good Beer Guide Belgium, to see if all that was said about Belgium and beer was true. Would we find evidence of the 120 working breweries, producing over 800 different beers, the majority served in their own individual glasses? The range of beer styles, lambics, gueuzes, Trappist ales, blond ales, wheat beers, brown ales etc? The relaxed drinking culture where people take their time drinking small bottles of often strong beer as one would cherish a fine wine? 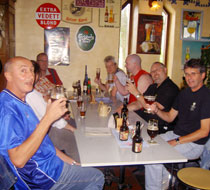 Our first port of call was just up the road, De Kelk, a fascinating warren of a place, aimed at locals, only spoilt by the pervading smell of the toilets. We were provided with some very welcome nibbles. We then made our way to the floodlit Square, which even in the rain was a marvellous sight. We paid a visit to the chip van before a short walk to find t’ Brugs Beertje. The GBGB had said about this place, “You cannot call yourself a well-travelled beer lover until you have been here. This is the place that made us decide to create this guide”.

We walked into this small, crowded, two roomed cafe and scanned for seats amongst the rickety tables. We sat, like kids in a sweet shop, pouring over the beer menu, there were over 250 on offer! Our beer guide proved essential reading as it gave descriptions of all the beers but Daisy and her staff were also extremely knowledgeable.

When you find a place like this you become very reluctant to leave. At 2.00 am we found the pub, that had seemed so busy all night, now only contained us! We bade Daisy farewell and she gave us that knowing look which said, I’m sure Ill see you again before you go home! We walked back, marvelling at the beers we had tasted and how lovely it was to walk through this beautiful city at night and not to be confronted by groups of lager louts. Hello bed.

Saturday, not surprisingly, brought a relaxed start. We missed our 3 euro breakfast at Bauhaus, it finished at 10.30am so had a leisurely walk through the Square and found a caf for a breakfast omelette, accompanied by a coffee for most and a beer for some! We then made our way through the busy city streets, avoiding numerous crocodiles of tourists on walking tours, and found the Straffe Hendrik Brewery Tavern, home of the De Halve Maan Brewery.

This was a bit of a disappointment as it was obviously geared to the tourist trade. We just opted for a quick beer which was quite ordinary, and opted to walk to the Bargehuis, a beer cafe, close to the canal. We studied the beer menu of some 125 beers and noticed two other groups of like minded individuals. It was here that we became a little more adventurous as we began to explore the great variety of beers. Chris tried De Dolle Stillernacht, which made his mouth go numb!

As it was passed round for sampling, one description was, smells like a Christmas pudding before its cooked! Philthy was very attracted to Rodenbach Grand Cru, described in the guide as, an extreme experience for your taste buds, with a unique smell. Scary thought it more like chewing rhubarb without the sugar! 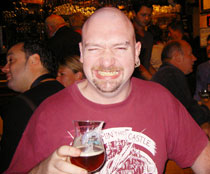 As evening approached, we thought a proper meal was a good idea, so found Terrastje, recommended for its Flemish cooking as well as offering 45 beers. Stevie thought it nice to be back in a place he and Chris had been asked to leave, some 10 years earlier. Scary, who had still not quite got the knack of drinking your beer slowly, savouring the smells and tastes, fell in love with the landlady. On leaving, a photograph of the two seemed appropriate although it was somewhat spoilt by the husband who muscled his way into the frame!

We walked through the narrow, cobbled streets to Vlissinghe, a classic Flemish building of 1515. As we sat and marvelled at the buildings interior, Philthy failed to miss the only beer of the weekend that was knocked over and spent the rest of the trip wishing he had brought another pair of jeans with him! Still, how he managed to get all he did bring into such a tiny bag remained a mystery.

The evening finished with a drink at Sol y Sambre before finding Staminee De Garre, a small, elegant caf tucked away down an alley. It was packed but we managed to squeeze into some seats, rest our aching bodies and study the beer menu of 130 beers. At 1.00  pm people were still coming in, looking for a seat. Lee thought it sensible to head for our beds and was accompanied by half the group. Apparently the rest followed shortly.

Sunday was to be our day of culture. Stevie and Chris set off relatively early to admire some of the sights. Lee bought a die cast model of a 1959 Chevrolet ambulance for his collection and we all made breakfast. We met in the Square and after a bit of sight seeing made our way to Brasserie Erasmus, well, it was midday!

This was a hotel, with a modern dcor and classical music playing. We selected from the beer menu of 120 beers and were also able to use Philthy’s downloaded Belgium Beer Card which entitled us to a free drink, good lad! We were able to use the card again at Dickies, where we sat outside, enjoying the Autumn sunshine.

It became apparent just how many people cycle in Bruges. After a drink at De Kuppe (100 beers) we went to De Zolder (66 beers), a fascinating cellar bar. It was here, Scary, who had been quite reserved today, ate mustard! As the evening drew on there was only one place to finish our weekend, back to see Daisy at t’ Brugs Beertje. Again we were the last to leave, it was only 1.00 am but we were going home in the morning. 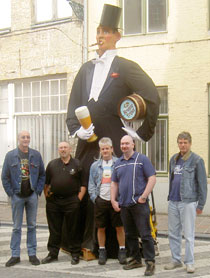 We were all up early on the Monday, packed our meagre bags, had breakfast and awaited the taxi to take us to the station. We had our last Belgian drink in a cafe opposite the station at Brussels. Prices here were very cheap and some thought it would be rude not to take a couple of bottles for the journey back on Eurostar. The journey back was fast and smooth interrupted only by the appearance on the train of a customs lady who singled out one of our party for a thorough inspection. He accepted the intrusion gracefully before moaning that it always happens to him!

We had time to enjoy a pint at the Euston Flyer before limping to Kings Cross and getting our train home. Despite a break down of the air conditioning, which threatened to melt our Belgian chocolates, we got back safely to Newark and contemplated a great weekend and all the recommended places we didn’t have time to visit! Are you with us next time?