We landed at about midnight and had pre booked an airport transfer. I have to say it was probably one of the smoothest and most efficient transfers that I have ever done (and I’ve done a few) using various methods over the years. We reached our hotel in the Buda part of the city, hassle free, pretty much retiring to our rooms and bed straight away, so the Budapest night clubs would just have to be disappointed!

The next morning, Saturday, and the sun shone briefly but blink and you would have missed it. After that, it pretty much lagged it down for the rest of the weekend. There are a few options when it’s raining in Budapest other than getting wet, one of those being… a pint!

My first (well not exactly a pint) introduction to Hungarian beer was a glass of Soproni 1895, apparently the second most popular beer in Hungary behind Dreher (which we’ll come to later). At 5.3% it is what I would call a ‘bog standard’ continental lager, nothing too much to get excited about, but apparently it has ‘a good hoppiness in both flavour and aroma!’ The 1895 bit is down to the year the Sopron brewery was founded. I later learnt that although it is still brewed in Sopron (a place in Hungary!) Soproni is part of the Heineken empire.

More drinking and more site seeing in the wet, before we headed back to our hotel situated in the castle district for a change of clothes before rendezvousing in the hotel bar to decide on plans for the evening. Our friendly hotel barman had recommended an amber/brown coloured bottled brew, called Borastuan, brewed by the Borsod brewer (owned by brewing giant Inbev). At 5.2% it was a palatable little number with a roasted malt flavour. By now it was chucking it down, so a quick sprint to a nearby restaurant was the order of the day.

Day 2 – raining!
We had decided that if we were going to get wet then we may as well do it in style and visit one of the many spas that Budapest is famed for. On our way we came across a group of young lasses speaking English. “What’s the occasion?” we asked. “We’re on a hen party!” came the reply. I digress.

Prior to the spa we visited a pub with the name ‘For Sale’, although I don’t think it was. It was full of character and I include the landlord in that description. It was a bare boarded place with straw on the floor where they encouraged you to just chuck your peanut husks from the complimentary big basket of them that sat on the table. All around the walls and ceiling there were bits of paper, beer mats, notes and tickets pinned up, by both the owners of the establishment and visitors alike. On the tables there were candles burning. 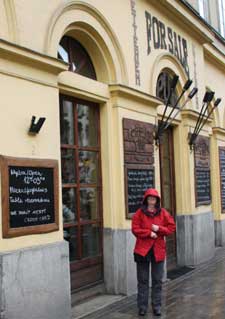 Hmm, what a great combo, little bits of paper on the walls and ceiling, straw on the floor and lighted candles! To this little paper and card confetti collection was added a Newark 15th beer festival beer mat, that I just happened to have with me. I also decided to brighten up our table by distributing a load more. Upon seeing them the landlord seemed surprised but pleased and in gestures asked if he could keep one. I gestured back that I was intending to leave them anyway. He soon returned to our table with a load of his own that he wanted to give me.
So if you wonder why there are a load of Hungarians at next years festival…

Day 3 – Final Day
I have to say, we were getting a tad concerned because the volcano had been blowing its ash cloud in all sorts of directions again and if that delayed us, then that would push us into the B.A. strike day period. “Serves you right for flying B.A.”, I hear you say? Yes, but one of the guys in our party works for B.A. and had managed to get us a deal. And a deal’s a deal, not to be sniffed at! Anyway, why worry about something you can’t control, when you can console yourself with a drink!

At least the weather had improved, a little. It had finally stopped raining and was now just blowing a gale. Time for a beer! Not just any beer, mind, but Hungary’s number one, most popular choice, which I realise just tends to be the best marketed. Oh! and it’s owned by Sab Miller.

Dreher Classic at 5.5% (I think) is ‘a very pure pilsner that pours a beautiful golden colour and has a small white head.’ Who writes this stuff? Possibly marketing people? For me it was just another so-so lager, although you must believe me when I say I really did want it to be so much more. Named after Anton Dreher, the brewery was established in Budapest in 1862. 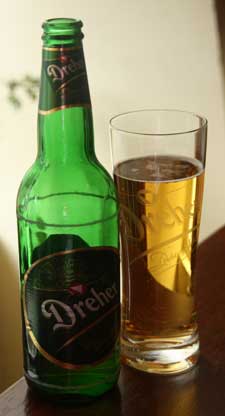 Having downed my refreshing glass of Dreher Classic, the guilt of sitting around in a bar at 11am was eased somewhat by some more site seeing. Well you can’t come all this way and just drink mediocre lager, can you? So, we tried for a second time to get into the imposing parliament building but failed again (no more tickets or closed on Sunday or something? Or both?) It wasn’t meant to be, so, drown our sorrows, maybe?

No sorrows to drown, so we hiked it up to Heroes square before finding a Turkish themed bar where I had a rather pleasant bottle of Gosser, a dark 4.6% Austrian style beer brewed under licence by Heineken Hugaria, the same lot who brew Soproni. A bit of a metro ride and walk back to the hotel before a quick prayer to the Icelandic God of Fire and thunder prior to heading off out to the airport and the flight back to Blighty

Luckily, our prayers were answered and we didn’t fall into the clutches of the British Airways Unite union.

Beer Warrior in Budapest was Philk