When in Rome… Beer Warrior visits the Italian capitol.

Drive like a maniac. Try to run down pedestrians. Ignore all rules of the road. Bill Bryson once wrote You turn any street corner in Rome and it looks as if you’ve just missed a parking competition for blind people. How true this is; the Italians park at all angles including 90 perpendicular to the street. They double park and even park down the centre of the wider streets. Traffic wardens dont seem to exist and every other car has a dent or a scratch or a smashed headlight. They just don’t care.

Neither it would appear, do they care much for beer (birra). There are precious few bars (what there is tend to be British style bars) and getting a beer can be a drawn out affair. Most beer selling establishments are cafes and restaurants where you sit down and wait to be served. When you want to leave you have to get the bill. A pub-crawl could take all day!

No swift halves here. Mind you it was too hot to do anything swiftly.

In most cafe-bars there is only one beer on offer so its just a matter of shouting Birra and holding up the requisite number of digits. When you have such a vast choice however, things can get a little confusing especially when they haven’t got the one you want. There were several slurred attempts to recite the Monty Python cheese shop sketch, alluding to the lack of beers available.

We did however hunt down a little place in the Piazza Testtacio called LOasi della Birra which boasts no less than 500 beers on its menu along with several hundred wines, several hundred cheeses and dozens of types of ham. The beers are from all over the World including the UK, but many of them weren’t available. The disappointment was short lived though as our very accommodating hosts would always offer up the nearest alternative.

As the evening wore on the language barrier proved to be more and more of a problem as we struggled to even understand ourselves at times. 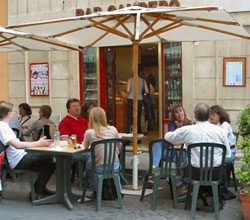 Some of the many brews that our little crowd did enjoy though were; Polar (5%) from Venezuela, Ceres Stout 7.7% from Denmark, Barbar Blonde 8%, St Feuillien 7.5%, Chapeau Peche 3.5% and Afflieem Dubble 6.8% all from Belgium, and not forgetting the host Country; Baladin Issac 5%, Baladin Wayan 5.8% and a very popular one G. Menabrea C Figli 150 Year Anniversary at 4.8%.

I think the latter’s popularity was down the fact that it came in huge bottles. Needless to say we all had a wonderful time.

The highlight of our time in Rome was sitting in a beautiful little square in front of the Pantheon under a scorching sun drinking a nice cold glass of the aforementioned 150 Year anniversary birra.

One of those moments that you wish could last forever and makes you completely forget the fact that you have to go home soon to what turned out to be a very wet England.

Beer Warrior in Rome was Bobcat