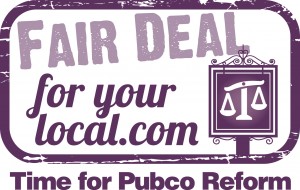 We have a very real opportunity to save the Great British Pub and we need you to get involved.

The Government backed beer and pubs in the recent Budget by abandoning plans for a beer duty hike and instead cutting beer duty for the first time in over 50 years. They are now building on their support for pubs by taking on the large pub companies who are exploiting pub licensees and putting the future of thousands of pubs at risk.

The fundamental problem is that the large pub companies are taking more than is reasonable from the profits of each pub– so licensees and pub goers alike suffer. A fair deal will result in the average tied pub being £4,000 better off annually.

Around a third of pubs in the UK are owned by large Pub Companies – property companies who lease pubs out to tenants to run as their own business. These pubs are contractually obliged to buy their beer only from the Pubco preventing pub licensees buying on the open market – this is known as the beer tie.

Pubcos make huge excess profits by using the beer tie to force licensees and ultimately the consumer to pay high prices. Licensees can pay at least 50% more for beer than a free-of-tie publican. Alongside this pubco licensees often find themselves paying above market value rents and have no independent adjudicator to settle disputes.

The Government is now proposing a package of measures to deliver a fair deal for local pubs, with:

Pub companies with fewer than 500 pubs will be exempt from these proposals but must abide by a separate voluntary code.

If we succeed with this campaign we can expect better pubs, fairer prices and fewer pub closures.

Your support in getting us this far really has made all the difference.  However, the battle isn’t won yet and we now need to ensure the Government sees its plans through. To make the most of this opportunity there are three things you can do right now:

You have until 14th June to take part.